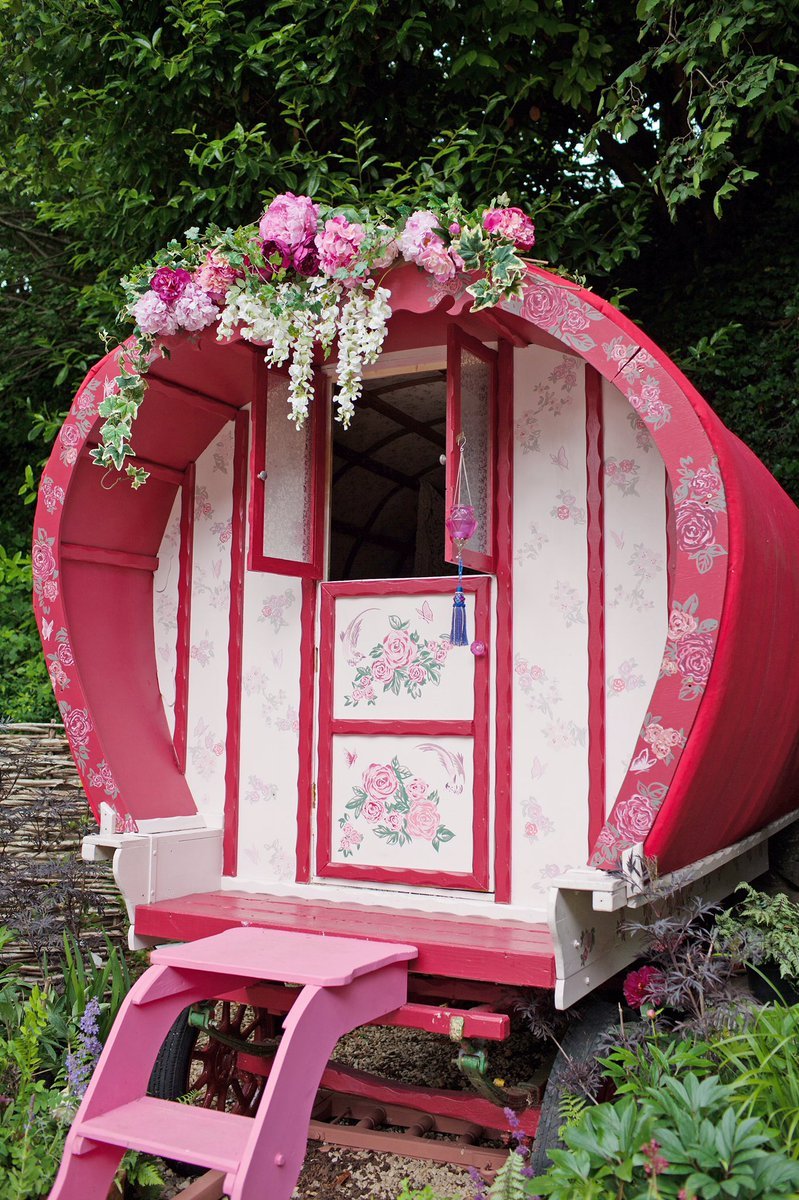 Celeb fashion and textiles designer, Pearl Lowe, tweeted her thanks to us earlier this week after we helped her with an unusual moving request. Pearl, one-time love of Bush’s Gavin Rossdale and now married to Danny Goffey from Brit-pop sensations, Supergrass, recently moved within Frome, Somerset. Alas, her moving company was unable to help with her beloved pink gypsy wagon. In her old property, it had been originally rolled through some bushes to get it into place, but over the course of two years, the bushes had grown, and it could no longer be retrieved via the same route. Pearl’s moving company had quoted her for the use of a crane they deemed necessary to move the wagon and she had demurred at the extravagance.

We relish a challenge and love working out solutions to seemingly insoluble problems, so we set to work on devising one and assured Pearl (mother of model-of-the-moment, Daisy Lowe) we would find a way. We conferred with Pearl’s gardeners and eventually conceived a route; by some margin the most difficult one, but also the most direct. It had the additional benefit of being the solution least disruptive to the gardens and lawn. With six of us involved, an hour was spent slowly moving the wagon across the slope of the lawn, making sure it didn’t tip over (it’s a top-heavy vehicle). We then had to take it down approximately 40 steps to a steep, cobbled driveway where finally it reached a level area. From there, we were able to load it on to the trailer and deliver it to its new house. The challenge didn’t end there because at its new property, it had to scale a wall before reaching its new location, but – again – for us, this was no problem. Now it’s safely in situ, for Pearl and family to enjoy.

Adapting Your Home to Become Eco-friendlier in Bath Advice for Students Moving to Bath for University Advice on Buying a Holiday Home in and Around Bath Bath – an excellent place to invest Decluttering and Covid Cleaning Your Home in Bath Do These Five Things When Moving into Your New Home European Removals from Bath Helping Streamline Your Business in Bath with Storage and Distribution Services hiring a removal van Housing Market Predictions and Right to Buy How Our Moving and Storage Services Can Help AirBNB Hosts In Bath How to Set-Up a Home Office in Bath Last-Minute or Emergency Removals in Bath moving to bath Moving to Bath from London with Thomas Firbank Moving to Bath – Some of Baths Top Entertainments Spots Our Lockdown Storage and Removals Services Packing Up Correctly to Avoid Breakages Planning Ahead for Christmas in Bath Planning and Booking Your Upcoming Relocation in Bath Preparing for a Move to Bath this Spring Preparing Your Home to Sell in Bath Relocating with High Value and Fragile Items Relocations from Bath to Any Major City in the UK or Europe REMOVALS EMERGENCIES Self Storage for Sports Teams in Bath Services for Start-Up Entrepreneurs in Bath sharing storage in bath Storage and Man & Van for Start-ups in Bath Storage Bath storage in bath The Benefits of Self Storage and How to Prepare The Best-Rated Removals Company in Bath The Best Country Walks Starting in or Near to Bath The Best Time Of The Year To Move In Bath The Best Time of Year to Move in Bath The Latest Information on the Housing Market in Bath Tips for First-Time Buyers and Bargain Hunters in Bath Tips for Summer Event Organisers in Bath Tips on Making Your Home Eco-friendlier in Bath Tips on Organising a Last-Minute Relocation in Bath Tips on Preparing to Sell Your Home in Bath Trim Your Business Expenses with Storage and Man & Van Upgrading Your Garden to Sell Your Home in Bath Why is Bath a Popular Place to Live?

This website uses cookies so that we can provide you with the best user experience possible. Cookie information is stored in your browser and performs functions such as recognising you when you return to our website and helping our team to understand which sections of the website you find most interesting and useful.

Strictly Necessary Cookie should be enabled at all times so that we can save your preferences for cookie settings.

If you disable this cookie, we will not be able to save your preferences. This means that every time you visit this website you will need to enable or disable cookies again.

This website uses Google Analytics to collect anonymous information such as the number of visitors to the site, and the most popular pages.